Tickets available at the gate 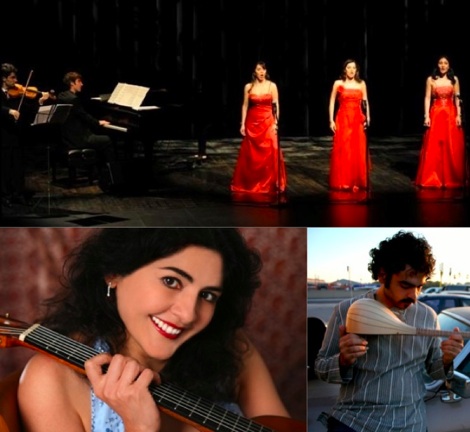 Tickets available at the gate

Treat yourself to the American debut performance of the elegant Three Iranian Sopranos. Nasrin Asgari, Shirin Asgari and Kamelia Dara have charmed and delighted audiences since they formed their group just over a year ago with pianist Hooman Khalatbari. Born in Iran, the singers met and became friends as students at the University’s of Music in Vienna and Graz, Austria. Their repertoire includes famous Persian folksongs as well as popular European Arias. [Watch BBC Report]

Lily Afshar is one of the greatest classical guitarists alive. Her solo, chamber, and concerto appearances combined with her adventurous recordings have earned her the status of “one of the world’s foremost classical guitarists” according to Public Radio International.  The Washington Post described her onstage performances as “remarkable, impeccable.” But perhaps equally as important is her reputation for expanding the contemporary classical guitar repertoire.

The evening will begin with a performance by Tehranosaurus, led by a rising star in Iranian music Fared Shafinury. Fared is an Iranian American musician living in Tehran and Austin, Texas. His music combines jazz, blues, indie rock, western classical and north Hindustani music. It is Persian classical music, however, that has always held a sacred place in his heart.

I look forward to this special evening which will once again highlight the quality and diversity of Iranian musicians.