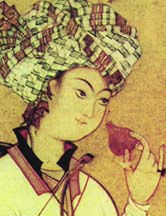 From "The Ethics of the Aristocrats and Other Satirical Works" a collection of 'Obeyd-e Zakani's anecdotes translated by Hasan Javadi (Jahan Books, Washington DC, 1985).

A gypsy scolded his son and said, "You do no work and waste your life in idleness. How often must I tell you to practice and learn how to dance on a rope and make a dog jump through a hoop so that you can achieve something in your life. If you don't listen to me, I swear by God, I will send you to the school to learn their good-for-nothing sciences and become a scholar so as to live in misery and adversity and never be able to earn a penny wherever you go."

In such witty and pungent anecdotes 'Obeyd-e Zakani criticizes the social corruption of his age. 'Obeyd-e Zakani (died circa 1372 A.D.) is one of the most remarkable poets, satirists and social critics of Iran, whose works have not received proper attention in the past. After being translated into Russian, Danish and Italian, this is the first selection of his works in English.

'Obeyd's satirical works more than anything else in Persian literature illustrate the social conditions of this period. It is true that some other poets of his age vehemently attacked corruption and social injustice in their poems, but the wit and insight of 'Obeyd give his works a special character.

'Obeyd looks upon this world of extravagant indulgence and corruption with the censorious eye of a Juvenal and portrays it with the cynicism and wit of a Voltaire and the hilarious grotesqueness of a Rabelais. Underneath his cheerful irresponsibility and nonchalance there lie a sadness and bitterness.

Seeing this scene of deceit, greed, lust, sycophancy, perversion, scorn of the old values and virtues, extremes of wealth and poverty, violence and bloodshed, he expresses his indignation in the form of scathing stories and sardonic maxims.

He says: "Engage in ribaldry, cuckoldry, gossip, ingratitude, false testimony, selling heaven for the world, and playing the tambourine, so that you may become dear to the great and enjoy your life."

Someone had stolen Talhak's shoes when he was in a mosque and thrown them into a church. He said in amazement, "It is strange that I am a Moslem and my shoes are Christians."

A carpenter took a wife, and after three months she gave birth to a son. The father was asked, "What shall we call this boy?" He said, "Since it took him three instead of nine months to come to this world, he must be called the royal courier."

Someone asked his holiness 'Azud al-Din, "How is it that in the time of the caliphs people would often claim to be God or a prophet and now they don't?" He said: "These days people are so oppressed by tyranny and hunger that they can think neither of God nor of prophets."

A muezzin would call out and then run. He was asked, "Why are you running?" He said, "They said that my voice is beautiful from afar. I was running so that I could hear it from a distance."

A man from Qazvin went to fight the heretics carrying a large shield. A big stone from the fortress hit him on the head and badly hurt him. He was annoyed and said "You fools, are you blind? Why did you hit me on the head? What do you think this huge shield is for?"

The father of Juha had a slave-girl with whom he would occasionally have intercourse. One night Juha crept into her bed and embraced her. She asked, "Who are you?" He said, "Me, my father."

There was a governor of Khorasan called Khalaf. Once he was told that there was a certain man who looked much like him. He called the man and asked him, "Was your mother a saleswoman frequenting the houses of the nobility?" The man answered, "My mother was a shy woman who would not go out of the house, but my father worked as a gardener in the houses of the great men."

Mas'ud the astrologer saw Majd al-Din Homayounshah working in his garden. He asked, "What are you planting?" "Nothing very useful," was the answer. The other retorted, "Your father was the same. He too never sowed a useful seed."

A Christian got converted to Islam and was being taken around the town in a procession. Another Christian saw him and said, "Were there not enough Moslems that you became converted too?"

A woman asked Talhak, "Where is the candy shop?" He said, "Inside a lady's skirt."

An Arab went to Mecca on a pilgrimage and his turban was stolen. He said, "O God, once in my life I came to Your house and You had my turban stolen. If you ever see me here again, have my teeth broken."

Satan was asked, "Which class of people do you like the most?" He said, "Salesmen." They asked the reason. He said, "I was content with lies from them, but they added false oaths as well."

Harun asked Bohlul, "Who is the most dear to you?" He replied, "The one who feeds me well." Harun said, "I will feed you well. Then you will be my friend." Bohlul said, "You can not have friendship on credit."

A preacher said from his pulpit, "Whenever a man dies drunk, he is buried drunk, and he will rise drunk from his grave." A man from Khorasan who was at the foot of the pulpit said, "By God, one bottle of such a wine is worth a hundred gold coins!"

A man said to an interpreter of dreams: "I dreamed that I was making eggplant casserole from the dung of a camel. What does this mean?" The dream interpreter answered: "Give me two gold coins first, and then I will tell you the meaning of it." The man replied, "If I had two gold coins, I would buy eggplants to make casserole so that I would not have to dream about it."

Caliph Mahdi got separated from his army one day on a hunting trip. At night came upon the house of a nomadic Arab and ate a humble meal there. The Arab brought out a jug of wine. After they had drunk a cup, Mahdi said: "I am in the retinue of Caliph Mahdi." After the second cup was served, the caliph said: "I am one of the lieutenants of Mahdi." After drinking a third cup, he said: "I am Mahdi himself." The Arab took the jug away, saying: "You drank the first cup and claimed to be a servant; with the second you became an emir; and with the third you claimed to be the caliph himself. If you drink another cup you will certainly claim to be God." The next day, when the army was once again united with Mahdi, the Arab fled in fear. Mahdi had him brought into his presence and rewarded him with some gold. The Arab said: "I swear that you were telling the truth, even if you claimed to be the fourth one!"

Juha's father gave him two fish to sell. He went around the streets until he came to the house of a very beautiful woman. She said, "Give me one fish and I will make love with you." Juha gave her the fish and received what she had offered in exchange. Having enjoyed it tremendously, he gave her the other fish and made love to her a second time. Then he sat by the door of the house and said, "I would like to have a drink of water." The woman gave him a pitcher of water; he drank it and then threw the pitcher to the ground and broke it. Juha suddenly saw the lady's husband coming, and he began to cry. The husband asked him, "Why are you crying?" Juha said, "I was thirsty and asked for some water at this house. The pitcher slipped from my hands, fell, and broke. I had two fish and now this fine lady has taken them in exchange for the pitcher." The man reproached his wife saying, "So what if he broke the pitcher?" Then he took the fish and gave them to Juha, so he could go home happily.

They brought an eggplant to Sultan Mahmud when he was very hungry. It pleased him greatly and he said, "Eggplant is a tasty dish." A court favorite who was present, gave a lecture in praise of the eggplant. When the sultan was full, he declared, "Eggplant is a very harmful thing." Then the same courier made an exaggerated speech on the harmfulness of the eggplant. The sultan asked in amazement, "You wretch, how come you are not praising it anymore?" The man said, "I am your courier, not that of the eggplant. I have to say something that pleases you, not the eggplant."