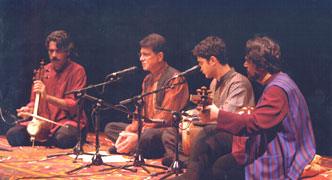 This program features three of the most important figures in classical Persian music who will be touring together again after their last two sold-out North American tours: Iran's great vocalist Mohammad Reza Shajarian; tar (long-necked lute) maestro Hossein Alizadeh; and Kayhan Kalhor, a virtuoso of the kamancheh (spike-fiddle). They will be accompanied by Shajarian's son, Homayoun Shajarian (tombak - goblet drum, vocals), who has was hailed by the press for his vocal technique. Their program features all new works drawing on the rich heritage of Persian classical music and ancient Sufi and contemporary poetry. This tour also celebrates the release of their third cd "Faryad" on the World Village label. Their last cd, "Without You," was nominated for a Grammy.

"It is almost impossible to translate the significance of the tour."
-- Sunday Boston Globe

"Shajarian is a superstar, the Pavarotti of Persian classical music."
-- Toronto Globe & Mail

"They were hailed with three standing ovations-one before they'd performed a note."
-- Washington Post