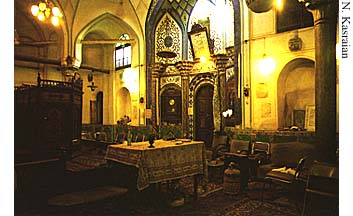 From "Freedom, within limits" published in February 1997 by "Forward" in New York. See also "Singing the blues" about Iranian Jews in the 19th century.

I sat among a group of Iranian soldiers watching "Lebanon, My Love" ("Lobnan eshq-e man") in a movie theater in Shiraz. Of the two general types of Iranian action films -- killing Iraqis and killing Israelis -- it was the latter. People cheered as the Hezbollah members infiltrated into the southern Lebanon security zone and ambushed the Israelis. Every time a Zionist was killed, there would be loud cheers. When the "freedom fighters" approached an unsuspecting Israeli, those around me would shout "kill the Jew!" in anticipation.

Despite the vitriol of the movie theaters, 30,000 Jews, down from 85,000 on the eve of the revolution, remain in Iran, and they are relatively unharassed. Every Thursday night, hundreds of Jewish families gather near Tajrish Square in fashionable northern Tehran to exchange the latest gossip or talk business while the teenagers check each other out. Others take a pre-Shabbat break and eat at one of Tehran's two kosher restaurants. Friday nights, the synagogues fill up in Tehran, Shiraz, Isfahan and Hamadan (the burial place of Esther and Mordecai of Purim fame). Smaller numbers of Jews live in Kerman, Kashan and Yazd.

Things have settled down since the tumultuous times of the Islamic Revolution, when tens of thousands of Jews left for Israel, Western Europe or America. The community has stabilized; new births are keeping up with deaths and emigration. At weddings, the congregants in Tehran or Isfahan will chip in to bring up the rabbi from Shiraz. In the religious atmosphere of the Islamic Republic, intermarriages are not an issue. As long as the Jews keep a low profile, the government does not harass them. Thus, while synagogues thrive, no signs appear on the street to advertise their presence. Sometimes the synagogues are distinguished by faded "Death to Israel" graffiti on the walls, but more often than not a visitor must ask residents where the "Jewish mosque" is.

On the Shabbat I was there, over 500 Jews crowded into the synagogue in Abbas Abad, one of Tehran's 15 functioning synagogues (none of which, unlike mosques, receive government subsidies). Two soldiers outside helped with crowd and traffic control as the service let out. Walking to my host's apartment for a home-cooked Shabbat meal (Jewish mothers are the same the world over), they assured me that they considered these soldiers to be more assistance than surveillance. Indeed, outside the smaller synagogues, no guards were present.

Surveillance took a different form, though. Anytime I entered a synagogue for the first time, I would be surrounded by congregants for my "interrogation. " Once assured that I was who I said I was, they would talk to me. "We have no problems under the Islamic Republic," they said. "Things have improved since Imam Khomeini came to power." However, walking home or driving up into the mountains, the story changed. "Life is okay, but we don't like the government." However, in my travels, I found that this complaint could come just as easily come from a Christian or Moslem.

Life for Jews in Iran is by no means free, but Iran's Jews have reached a modus vivendi with the Islamic Republic. In Isfahan, 300 Jews walk into the synagogue on Meidan Felestin (Palestine Square) each Friday to hear announcements from the elected Jewish representative to the national Majlis (parliament) read out after services. While some students at the University of Isfahan chose to live off-campus because of student harassment in the dorms, no one complained of discrimination in university admissions or at the hands of their professors. A handful of Jewish instructors remain in the major universities, although not in the proportions that existed before the revolution.

Jewish students worry that the situation might change as the growing movement to "Islamize" the universities -- something the older Moslem professors also privately lament -- gathers steam among hardliners. Already the curriculum is subtly changing. One Jewish university student complained about new textbooks and how her teachers fill in the gaps in some of the old ones. Past conspirators, such as those who ousted the 19th-century prime minister Amir Kabir (the only Qajar official in favor with the new regime), have become Jewish in classroom accounts and some textbooks, fulfilling Ayatollah Khomeini's adage that "there are small lies, there are big lies and then there is history. "

Many Jewish merchants still work in the Tehran bazaar or along Palestine and Ferdowsi streets in Isfahan. Business is not good, but it is no worse than anywhere else in Iran. As elsewhere in the Middle East, merchants are grouped in areas by profession. Carpet merchants work side by side, as do tailors or auto mechanics. The Jewish and Moslem merchants maintain good relations, and not just because the Moslems want to buy alcohol, which some Jews and Armenians bootleg. Moslems and Jews work for each other, stop by each others' shops for tea and attend each others' weddings.

While the bazaaris have traditionally been conservative -- they were prominent backers of Khomeini during the revolution -- many Jews and Moslems feel they are in the same boat, if for no other reason than they are all Iranian. Throughout Iran, the national identity is more important than the religious. After all, Iran has always been more of an empire than a nation-state. As the Shah emphasized -- and the Islamic regime tries to forget -- Iran has not always been predominantly Islamic; the Islamic armies were just one of the many invading forces that subjugated Iran. For most of Iran's history, Moslems, Christians, Jews and Zoroastrians lived side by side in peace.

Furthermore, as Saddam Hussein tried to exploit during the Iraq-Iran war, Iran is also an ethnic mosaic comprised of Turks, Persians, Arabs, Armenians and Baluchis. As a result, a sense of "Iranianism" has developed, reducing anti-Semitism in the street even as the government promulgates it for political reasons in the cinema and newspapers.

While the anti-Israel plank is perhaps the only unmutable policy of the Islamic Republic, upon which the government relies to bolster its Islamist credentials, for the man on the street, many other worries are closer to home. The government does use its position on the "usurping and criminal Zionist regime" to justify some degree of official discrimination, however. While Moslems, Christians and Jews are conscripted into the army, Jews and Christians cannot make the military their career, nor can they work for the government. Some older Jews told how they were quietly forced out from quasi-governmental upper management positions in banks and other "sensitive" offices.

Also, despite being in the midst of what some Israelis might describe as their greatest enemy, the Jews of Iran do have contact with Israel. At one Shabbat dinner in Isfahan, the pre-meal blessings were interrupted by a phone call from Israel that had been routed through Turkey. Some Iranian Jews have taken the same route, traveling to Israel through Turkey, Greece or Cyprus. However, this route has become dangerous since stamps from any of these three countries can now cause an Iranian Jew's passport to be confiscated, although the routes through Italy or France remain open.

After 17 years of life in the Islamic Republic, the Jewish community in Iran has achieved a balance. Theocratic Iran is not totalitarian Syria. The Jews have breathing space and freedom between well-defined limits. Scapegoating for political and religious reasons has been declining. Many young Jews talk of leaving, but many others have the opportunity to emigrate and decided against it. Nevertheless, tension is growing about the future, with President Rafsanjani currently barred by the constitution from serving a third term and the hard-line Majlis- speaker, Nateq Nouri, poised to replace him. After more than 2,000 years of both tolerance and oppression in Iran, the Jewish community looks as if it will weather the storm.